Fear not dear readers, we did not drop off the ends of the earth near the end of our year away — we just got really busy adjusting back to life in Vancouver. Catching up with family and friends, setting up our apartment, and getting back to work and local volunteering.

In our last post we described our time in Vietnam and Laos. We mentioned that Vietnam is one of the most polluted and dirty countries we have ever visited. We did not realize that Hanoi is among the world’s most air polluted cities in the world. Smoke and other toxins everywhere from farmer’s burning their fields, huge manufacturing zones, coal-power, and no controls on vehicle emissions. Horns blasting everywhere and at all times of the day and night. Add to that men urinating in the streets and venders heaping trash along the broken sidewalks, and you are left with a general impression that no one cares about any aspect of the environment.

The contrast with our final destination before heading home was remarkable. The streets of Tokyo are utterly clean, well maintained, and strikingly quiet. We even wandered into back alleys to try and find the seedy underbelly. Clean and quiet. No littering anywhere, even though there are outdoor food and beverage vending machines throughout residential neighbourhoods. Signs remind locals and alert visitors that smoking is not allowed on the sidewalks. On the trains, signs encourage riders to not talk on their cel phones and to put them on vibrate. The trains themselves run very quietly, unlike Skytrain in Vancouver, which squeals and clacks along like an old amusement park ride.

Speaking of trains, we’ve never seen so many trains in one city. They are run by numerous competing companies so you sometimes pay two or three separate fares to get from one place to another. Likely the locals eventually figure out how to get around without paying as much as we were loading into ticket machines!

We took it easy in Tokyo. there are dozens of museums, art galleries, and historic sites, but we selected just a couple to visit, along with the central train station. The massive walls and gates around the Imperial Palace grounds are impressive, and although it was not the best time of year to visit the gardens, there are some interesting ruins, a few ancient buildings you can visit. You don’t get very close to the Imperial Palace itself.

And dear readers, you just know we checked out the craft beer scene in Tokyo! It seems undeveloped for a city this size, nothing was described as a tasting room but lots of places calling themselves beer halls. The few places that actively promoted craft beer were numerous train trips apart. Our favourite was WIZ, which offered us a wide selection of craft beers from around the world. Next up was a small hole in the wall called Titans Craft Beer Taproom. They had a smaller selection but they rotate the taps, perhaps they only get a keg of each beer at a time.

After lifting a final IPA and saying goodbye, we packed our bags for the last time, boarded a fast train to the airport, and closed the chapter on 51 weeks of life on the road (vida en el camino!). We hope you have enjoyed our posts as we wandered through 21 countries on four continents!

One of the towers along the walls of the Imperial Palace, surrounded by a wide moat.

Massive doors into the walled grounds of the Imperial Palace.

Quiet outside, but inside the stores, every display features loud audio urging you to buy, buy buy! 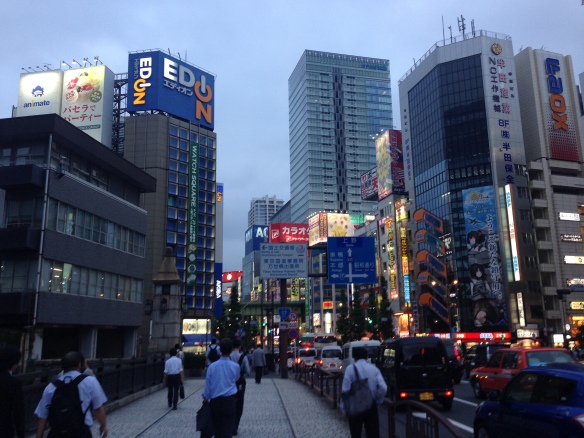 Even the construction sites are neat and tidy!