Capital cities around the world usually offer visitors the most in terms of important attractions, good amenities, and easy travel connections. If your time is tight and you can’t venture outside the capital, you’re only seeing one aspect of the country you’re visiting. Sometimes that’s all we have time for too. But if we can, we strive to see some countryside and at least one other city or region before we move on.

That often means taking a chance on local transport and struggling with directions (and menus!) because fewer locals speak English. However, exploring beyond the capital also offers a less-constructed glimpse of community life with fewer shiny surfaces and as a bonus, fewer mindless tourists running around taking selfies and learning nothing about where they are.

We started our last trip in Bulgaria’s capital city, Sofia. We described our encounter here with the Roman Empire in our last blog post. Sadly, unknown to us, Sofia is also the most polluted capital city in the European Union – it is hard to breathe in public spaces, the result of coal-fired power, uncontrolled vehicle emissions, and chain-smoking on a massive scale. So our plan to escape the city was perfect.

You hear and read about classic railway journeys. The train from Sofia to the interior of Bulgaria is not one of them. On the platform you are mostly on your own figuring out if this is the right train or not, and where you’re supposed to sit. And no restaurant car, not even a coffee cart or bar service. Good thing we brought snacks! The toilet at one end of the car looked like something you would find in a prison cell. But we had a red-velvet six-seat compartment to ourselves for the entire length of the four-hour ride. We pretended it was a luxury suite!

We knew the train didn’t stop at our destination, so the first challenge was finding the bus from the village of Gorna Oriahovitsa to the city of Veliko Tarnova. No one spoke English, but one van driver seemed to be indicating that the bus we needed was due shortly. That worked out, although we did end up missing our stop in V.T. because we couldn’t figure out where we were along the way. Fortunately we pack lightly, it was a long walk back to the place we were staying!

Veliko Tarnova is one of the oldest cities in Bulgaria, and was once the capital although there is little left to show for it. A hilltop fortification, Tsarevets, suffered numerous attacks over the centuries, finally sacked and destroyed by invading Turks in 1393. It has been only partially reconstructed. On the day we were on site, it was a free-entry day but strangely deserted. We enjoyed walking along the walls and through the foundations.

Similarly deserted was the archeological museum, oddly tucked into the basement of a grim-looking library, entry by knocking on the door and waiting for someone to let you into several dusty rooms of Roman, Medieval, and Bulgarian artifacts in old glass cabinets. Then we had to search and call for the attendant to let us out.

We particularly enjoyed our interactions with young shopkeepers and servers – there weren’t many tourists around and they were happy to see us and tell us about their lives – and practice their English. Not surprisingly the wages are very low and prospects for better work quite limited. In the meantime, they are making it through the day with cheap black-market cigarettes from Moldova. But they are hoping for a better future, and we hope that for them too. 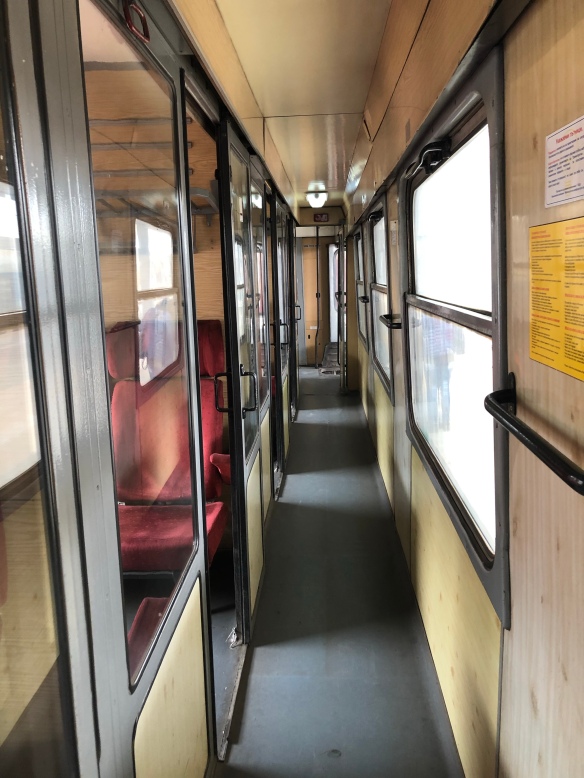 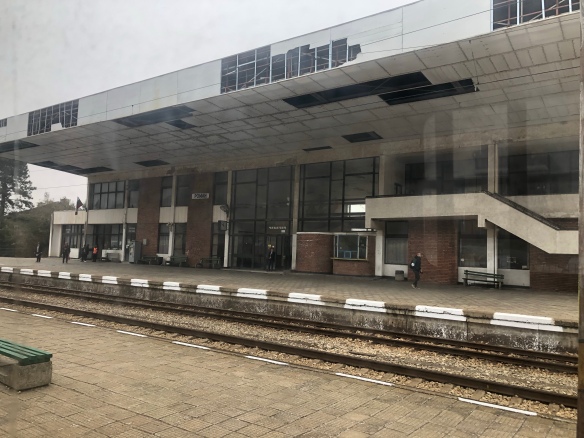 Lots of rundown railway stations and abandoned factories along the way.

And miles and miles of recently harvested crops. 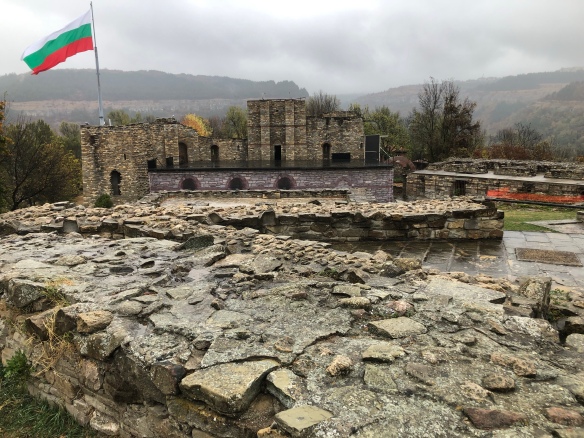 Tsarevets Fortress — Patriarch’s Complex (church) on the highest ground behind us. 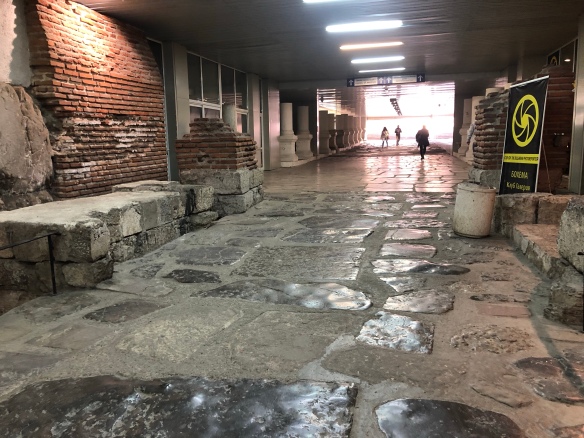 Back in high school we briefly studied the Roman Empire. Having to draw and describe some of the battle gear is all I recall, otherwise the idea of empire and what that might mean was utterly remote and abstract.

At it’s height some 1500-1900 years ago, the Roman Empire controlled a huge expanse of territory including a big chunk of Europe and part of what is now the Middle East and North Africa.

Ancient empires have come and gone, most without much to show for their occupation of foreign lands. Not so with the Romans, it seems everywhere they went, they brought technology with them. Just think aqueducts, public baths, temples, amphitheatres, roads, tile mosaics, statues, and memorials. Oh, and Roman numerals!

We have watched a play seated in a Roman amphitheatre in Malaga, Spain, walked along Hadrian’s wall in the north of England, and around the Roman baths that gave Bath its name in the south of England. We explored Diocletian’s walled palace and military outpost in Split, Croatia. And we walked through numerous ancient Roman ruins in Rome itself, and made our way to the well preserved Roman holiday-getaway, Pompeii.

To now find evidence of Roman occupation and technology during our visit to Sophia is an unexpected treat. Numerous Roman villas were discovered and documented during the Communist era. However, perhaps the most astounding find was just a few years ago when the city was digging up a square to extend the Metro subway line. It was a uniquely preserved section of the Roman highway known as “via militaris”. The stone road was built to connect Roman territories in the Middle East and North Africa with central Europe, and passed right through the then-named Serdica.

They also found the foundations for stores that faced this road, another road in behind, more building foundations, and the city gate itself. At another site nearby they found an amphitheatre and more building remains.

Visiting ancient sites brings history alive, and sure beats sitting at a desk copying pictures out of an encyclopedia! 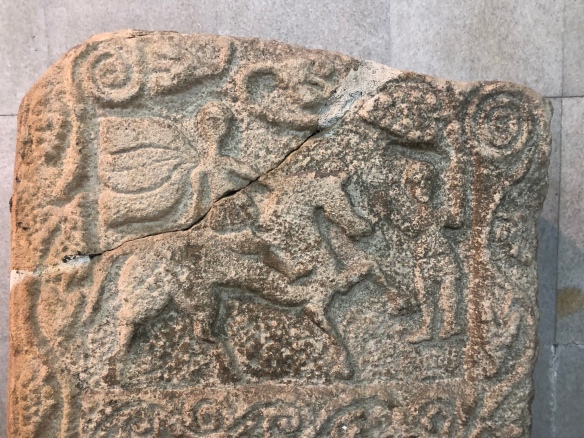 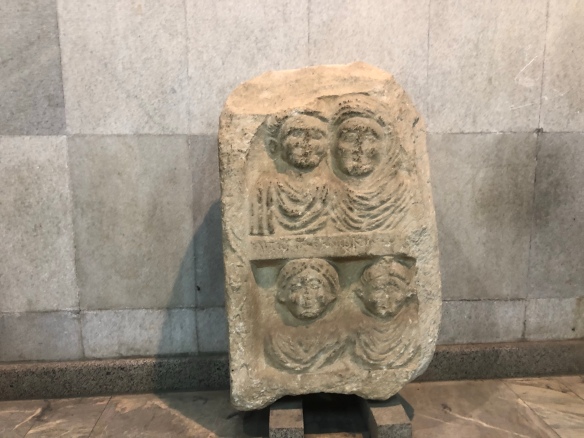 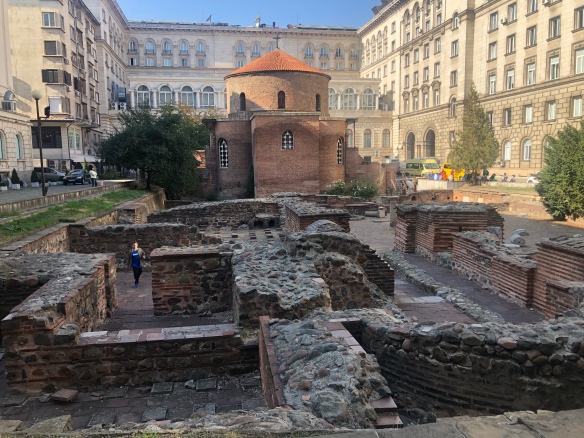 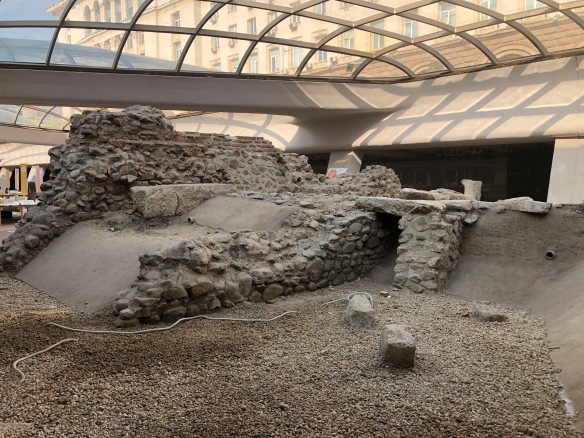 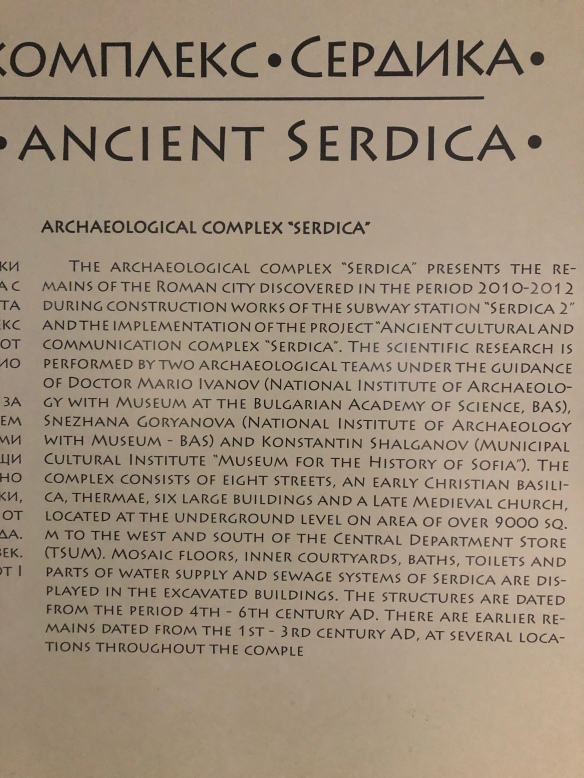