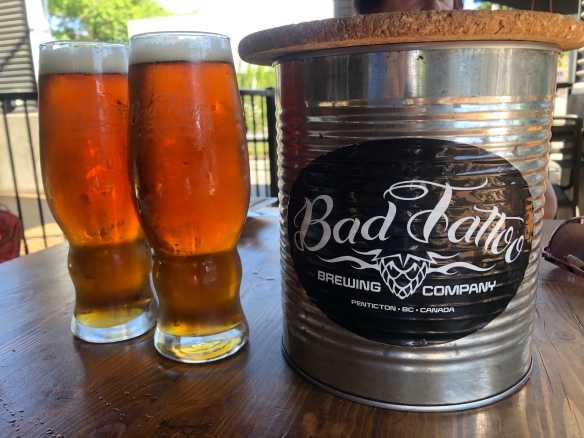 The global pandemic brought our travel plans to a grinding halt, and of course we know we’re not the only ones experiencing cabin fever. So, with international travel still not possible, in June we skipped away for a week in Penticton, staying at a small motel with a pool and excellent cleaning protocols in place. Walking to the nearest brew pub, we discovered that we had also wandered onto the BC Ale Trail.

The BC Ale Trail is a cool way to promote the craft beer industry in British Columbia, created by Destination British Columbia and the BC Craft Brewers Guild. They have broken the province into 18 local ale trails – we were on the Penticton Ale Trail featuring seven craft breweries. We had previously visited some of them and this gave us directions to a couple more.

The Barley Mill Brewpub was our destination that first night in Penticton, and that’s where we picked up a Penticton Ale Trail map and downloaded the app. And get this – you collect 10 points for every visit that is at least 24 hours apart. Eventually you can redeem from 50 to 200 points, for branded glassware, growlers (with purchase of a fill), or growler fills (with purchase of a growler), or discounts on food and merchandise from the various breweries. It won’t take long for dedicated craft brew enthusiasts to collect enough points to start enjoying rewards! 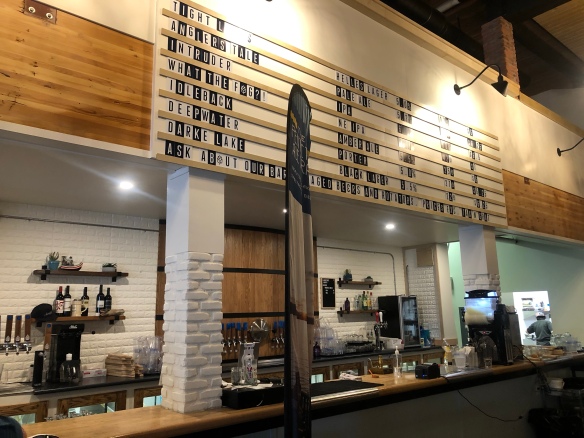 We managed to make five stops along the Penticton Ale Trail. Our long time favourite in Penticton has been Bad Tattoo, and they remain our “go to” for great beer and fabulous pizzas. We also regularly drop by Cannery Brewing, it’s usually not too busy and has a relaxed neighbourhood vibe. New to us was Highway 97 Brewery and Slackwater Brewing. In our view, Slackwater offers the best IPA in Penticton, the hoppy 60 IBU-rated Intruder.

All the brewery restaurants and tasting rooms were in full COVID-19 cleaning and masking mode except the Barley Mill, not all servers were wearing masks and cleaning between guests was rather haphazard – not what you want to see at the best of times.

A few weeks later back in Vancouver, it was time to explore another local Ale Trail, this one on the North Shore. Although there are 14 participating breweries on the North Shore, there is a convenient concentration of breweries in and near the Lonsdale Quay. Very handy if you’re on foot and getting to the North Shore via the Seabus. 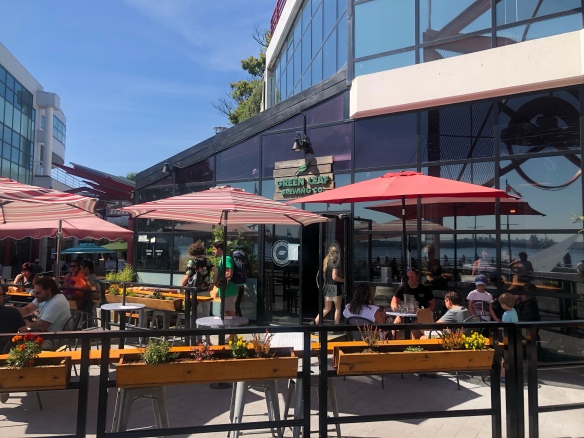 In fact the first brewpub is just a few steps from the Seabus terminal, the Greenleaf. Lucky for us on this sunny day, there was space for us on the outdoor patio. My flight featured a pale ale, two IPAs, and their grapefruit radler. The IPAs were disappointing, but I quite liked the Pie Hole pale ale.

The Tap and Barrel is a short walk from the other end of the Quay, but we skipped it because we’ve been to both the Tap and Barrels in Vancouver, and there was a line up. So our next stop was just to the east along an industrial strip of Esplanade. Father and son operated Beere Brewing has a small tasting room and lots of outdoor patio space. Deborah really enjoyed the Legit Snack IPA with hints of pineapple and grapefruit and I liked the Sure As Shoot IPA, creamy with citrus flavours. 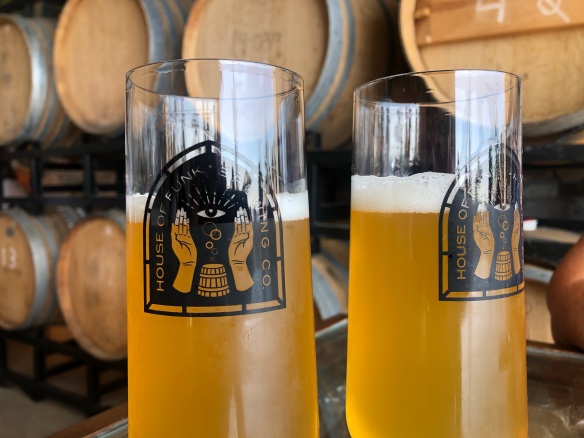 A few doors door is the House of Funk with a much larger tasting room and lots of sidewalk and street patio space. Their Farmhouse IPA begins with a slightly medicinal taste, but gets better as you go. The House of Funk logo is the most striking on the trail today.

Up one street are two more breweries. At North Point on 1st Street, Deborah liked the sour, but I had mixed feelings about my flight of IPAs. They were okay but nothing stood out. 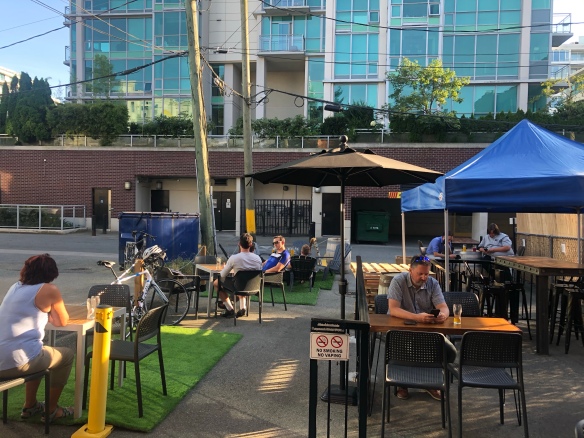 Our last tasting room was just up the street and down a flight of stairs. Streetcar Brewing’s hazy IPA was exactly what we were looking for: cloudy and juicy, with a strong and tangy citrus undercurrent. Our favourite beer of the day. By the way, the patio faces a quiet lane. It felt like we had stumbled across a secret neighbourhood hangout.

And yes, we collected lots of BC Ale Trail points!