We arrived in Granada on the evening of July 19th. We found our way from the bus station and dragged our suitcases through the narrow cobblestone streets of the Souk to our Airbnb in the old Albaicin neighbourhood. Must be a common sight as no one took any interest in us.

The next day we walked for hours around the area, and came across the Corral del Carbon, originally a roadhouse for the Arab traders bringing their wares for selling in the nearby Alciaceria, a major silk market in the early days, now a market for tourists. I bought lovely teal pants – made in Thailand, but perfect for travelling.

We walked around the Cathedral, a massive place. Nearby a musician making wonderful sounds from about 6 or 7 upturned pots… you can make music out of anything.A women was offering sprigs of Rosemary. The travel guides advise tourists to say no thanks; they offer the rosemary for free, but then take hold of your hand to read your palm… apparently they expect least 5 euros, or they will be insulted.

In gruelling 32 degrees Celsius heat, we followed steep winding roads up to the popular Mirador de San Nicolas (viewpoint). We checked later and the humidity was 16 percent in Granada… the lowest we have experienced in a long time. You were very hot, but any sweat evaporated quickly.

When we finally arrived, the view was worth every hot step. We could see over to the massive fortification, the Alhambra, surrounding hillsides and the city. It was marvellous! The sky is an amazing blue. The whole five days in Granada featured a lovely blue sky, making the world seem so much more vibrant.

It was so hot, so I suggested getting ice cream. There was a small store that sold ice cream right at the look out. For those of you who know me, ice cream is a no-no, but it felt good at the time.

The next day we caught the city bus up the hill to see the Alhambra, one of Europes’s top sights, and the the last Moorish stronghold in Europe. It consists of four sets of buildings, clustered on top of the hill overlooking the old city: the Palacios Nazaries, Charles V’s Palace, Generalife Gardens and the Alcazaba.

It apparently has around 8,000 visitors per day. We never felt squished or rushed in any of the fortifications. We did take the option of going early, arriving just before 9am. We knew it would be cooler then, and we would have more energy to explore. And explore we did!

First stop was the Generalife Gardens, it was the sultan’s vegetable and fruit garden and summer palace. They say this summer home of the Moorish kings was the closest thing on earth to the Quran’s description of heaven, planted more than 600 years ago. Apparently five hundred year old paintings show it much like it is today. It is really a peaceful spot.

Charles V palace and museo. It is a truly massive square block of a building with a circular inner courtyard that is one to the sky. The Christian king, Charles V didn’t want to live in the old Moorish palace so started to build his own. When his son took over, he abandoned this palace and built his own elsewhere… to me… so much waste and crazy extravagance. We didn’t spend much time there.

Our next stop was the Alcazaba. We engaged our inner mountain goats and climbed all over this oldest and most ruined part of the complex. These towers defended the town (medina) of 2,000 Muslims living within the Alhambra walls. Don took lots of photos!

Our last stop was the Nasrid Palaces. Spoken of as the jewel of the Alhambra, these Moorish royal palaces were certainly that! We saw rooms that were decorated floor to ceiling with ceramic tiles, molded-plaster walls, incredible carved wood ceilings (stalactites). There was open air courtyards with lovely fountains. There were calming and contemplation pools and gardens lush with vegetation.

My favourite room was a small domed room a side step away from where all the tourists were… it was so cool… we realized we could hear ourselves… so I stepped into the perfect spot in the middle and starting humming “ohm…..” the space started to reverberate the sound and the vibrations were incredible! We so loved it!

I could go on and on about Grenada and our experiences… but you need to get on with your day!

Lots of love and happiness sent to all who read this! 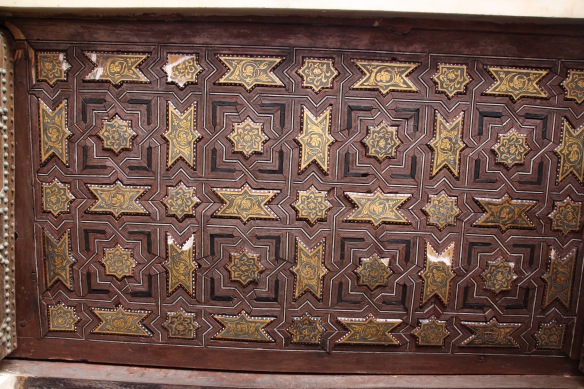 Moorish archway, for some reason known as the wine gate 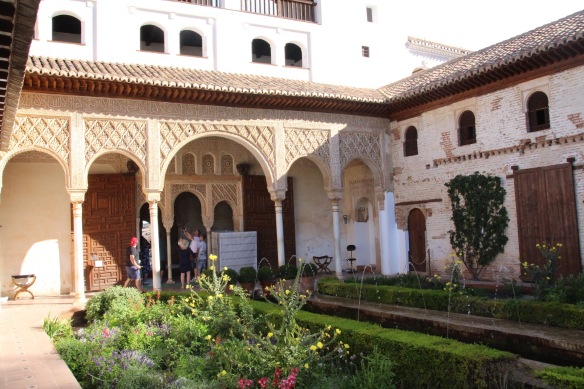 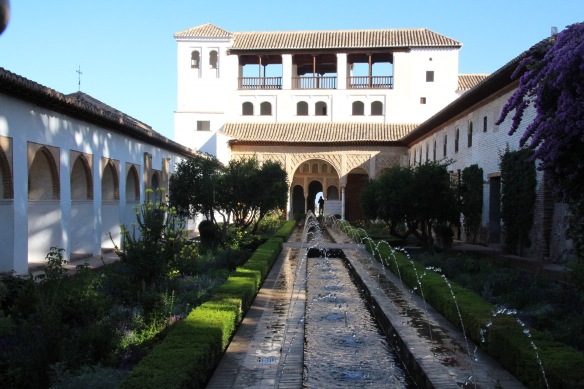 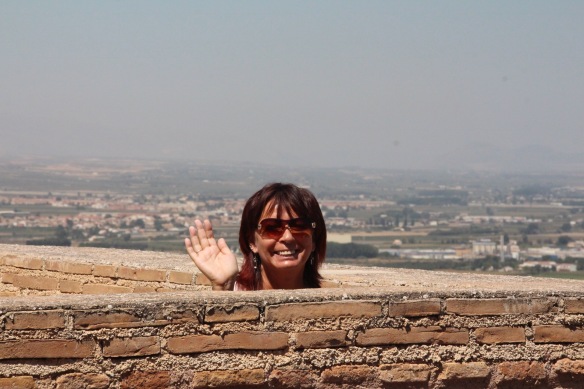 Enjoying the Alcazaba and the whole of the Alhambra

View of Alcazaba from the outer rampart 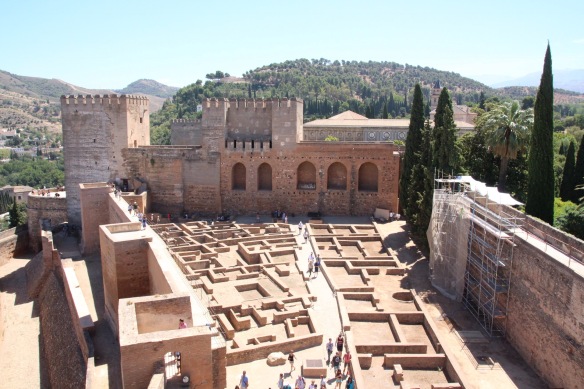 View of Alcazaba from the main tower 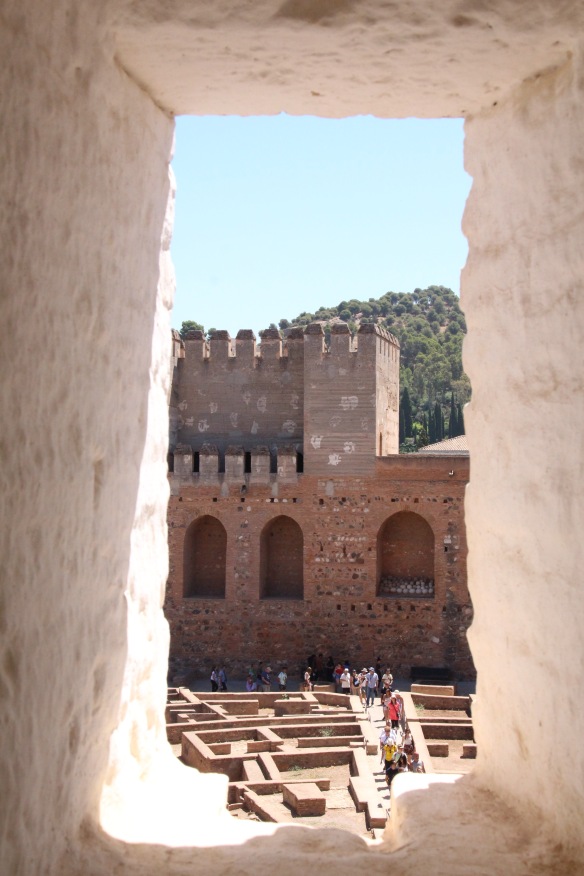 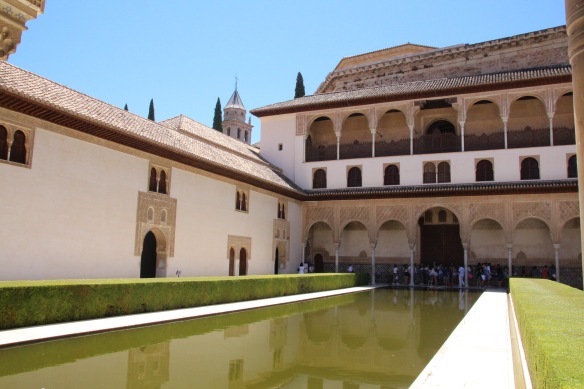 Courtyard of the Lions (Palacios Nazaries)

One of the ceilings, Palacios Nazaries (Alhambra, Granada) 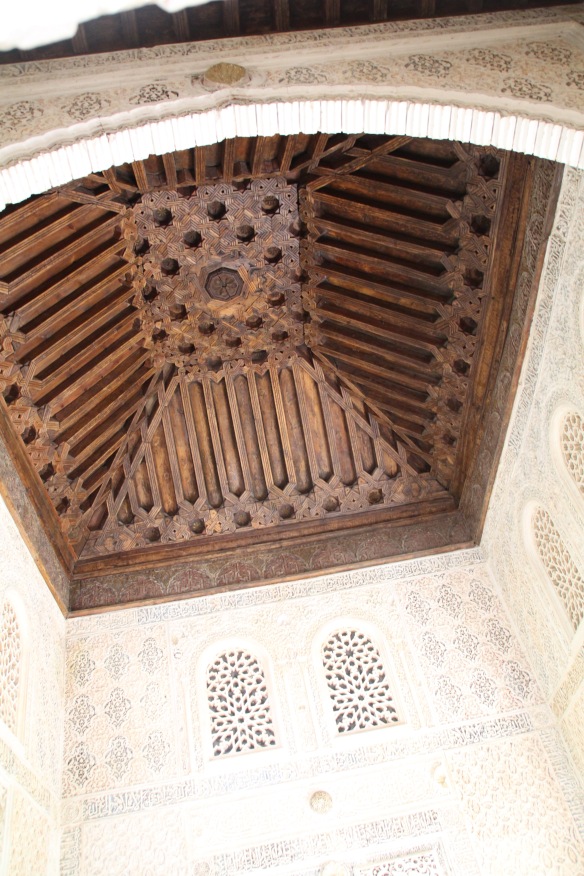 Alcazaba, one of the oldest parts of Alhambra

1 thought on “granada: favoured by moorish and spanish kings alike”