About to meet the friendly regulars at the Cauldron Bar, Limerick

Our last post described arriving in Dublin, establishing an “Irish Pub” research standard at the Guinness Storehouse, and then heading for Adare for several days. Despite the well-poured Guinness and mix of tourists and locals in each bar, we felt there was more to an Irish pub than we were finding in this cute little town.

Limerick is a 30-minute bus ride to the north, perfect for a day-trip from Adare. We caught an early bus that gave us time to wander around Ireland’s fourth largest city for several hours. We enjoyed the ancient buildings and bridges, found the famous Treaty Stone and King John’s Castle, and just off the well-travelled tourist trail, we discovered the tiny Black Cauldron Bar. We ventured in. The handful of men gathered at the near end of the bar paid little attention to us as we headed for a table along the side. Had we found an “authentic” Irish bar? There were the usual Irish pub decorations including numerous classic Guinness advertising posters, although these actually looked old and likely original from the time. The walls were also covered with regalia from Limerick-based Munster Rugby, one of four professional rugby teams in Ireland – good thing we weren’t wearing the wrong colours that day!

But there was something else going on here. A television over the bar was broadcasting the horse races that were apparently taking place all over the country, a monitor behind us was quietly updating the race schedules and results, and the bartender was taking bets and paying out the winners. The server was handing out freshly made chicken sandwiches and brought a plate over to us. And when they saw we had not run off, one by one the regulars dropped by to say hello, introduce themselves and tell us their story, usually peppered with more than a few expressions of “Jesus, Mary, and Joseph”, and wish us well. But first, each would gently caution us to ignore everything their drinking buddy had just said to us. This was the Irish pub experience we were looking for!

Of course, we did manage to sample more than a few famous pubs when we got to Dublin. The Brazen Head claims to be the oldest pub in Ireland and displays a Guinness World Record plaque as evidence. It certainly does feel older than the others, like a cluttered rabbit warren with creaky passages between rooms, walls covered in old photos and magazine clippings, and a set of taps in every nook and cranny.

Over in the Temple Bar district is the namesake Temple Bar, established in 1840. It is also a collection of rooms heavily decorated with old signs, photos, and memorabilia. One of the attractions is the daily program of live traditional Irish music. There is no cover charge but the price for a pint is higher here than elsewhere (although no one bothers you if you just wander in to listen to the music). Large groups of tourists would stream in, order one obligatory drink to say they “did Temple Bar”, and stream out. That’s no way to appreciate the music, soak in the atmosphere, and be in a place long enough to actually remember it!

A few blocks around the corner is the Porterhouse Central brewpub. To the dismay of tourists searching for a pint of Guinness to say they had one in Dublin, this bar features only its own and guest craft beers on tap, and bottled craft beers from around the world. We grew very fond of their Hop Head Pale Ale, timing our wandering around Dublin to get us here for happy hour.

A large “after-work” crowd gathers each afternoon, not really many tourists so we had a chance to chat with locals about working and living in Dublin. The people we talked to spoke fondly about the city, even if they had arrived from elsewhere. They also assured us that the week of sun we were enjoying was unusual; before crossing the ocean we had been warned that it rains a lot in Dublin, but this visit, not a drop. 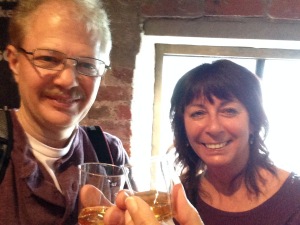 We managed to sample the fare at a number of other bars in Dublin, but these would be our top three choices, perhaps combined with a visit to the Old Jameson Distillery. The distillery once occupied a huge area in the Smithfield neighbourhood north of the Liffey River, complete with a workforce of thousands. Several decades ago the production was moved to Cork, and the distillery site mostly redeveloped for housing and commercial use. But they kept one building as a museum and tasting room. The tour is low key, but they do emphasis the triple distillation that is “the key to Jameson’s smoothness” and they offered a taste test to back up their claim. We were convinced, Jameson Irish Whiskey it is from now on!