We were completely ill-prepared for the extended winter that was bringing extra snow and a blisteringly cold wind into Boston. Fortunately, we found a brewpub near our hotel that provided refuge from the cold until the sun came out and we were able to enjoy the city in a more relaxed way. Enjoy it we did.

As Canadians, we hear a lot about the American revolution. Not so much the details, but an understanding that it was fueled by a deeply felt sense of injustice at the hands of the British. They saw the American colonies as just another endless source of wealth to be extracted without regard for the people who had cleared the land and made news lives for themselves in this new world.

Apparently Boston was an epicentre for dissent – a series of events including at least one massacre of civilians, led to one of the most famous speeches in American history. In front of an increasingly angry crowd gathered in a meeting hall in mid-December 1773, Samuel Adams’ words rang out: “Friends! Brethren! Countrymen! The hour of destruction or manly opposition to the machinations of tyranny stares you in the face!” Hours later, several hundred “sons of liberty” swarmed Griffin’s Wharf and dumped over 300 bales of tea into Boston Harbour to protest not just the unfair tax on tea but the broader issue of taxation without representation. as they say, the Boston Tea Party changed the course of American history.

So a visit to Boston must include some time to reflect on the spark that shaped the very notion of our neighbour to the south, and what better way than to walk the Freedom Trail!

We started at the Bunker Hill, a modest bit of ground overlooking Charlestown, across the Charles River from Boston, and the site of an important early large-scale battle between the British and the colonists. The colonists lost the battle but inflicted heavy losses on the British, taking it as a moral victory.

The Trail doesn’t represent a specific route or order of events. Rather, it simply links a number of important historic buildings and revolution-related events together in an easy4 km walk that can be done with a guide, or on your own by following a red-brick line down the centre of the sidewalk (our option). Along the way, descriptive panels at various meeting halls, cemeteries, important landmarks and monuments bring the story of the revolution to life. By the way, the Trail ends at Boston Commons, not far from the bar that helped shape the television series “Cheers”.

We also made a side-trip to the Boston Tea Party Ships and Museum: part exhibition, part participation, and home to one of only two surviving tea boxes from the Tea Party. We got to board a replica of one of the boats that had arrived bearing tea and other goods and toss a bale into the very same harbour that flowed with tea in 1773. Don’t worry, it was an empty bale, no tea was harmed in this re-enactment!

Heading for Boston? Walk the Freedom Trail and take in the Boston Tea Party – well worth the effort!

One end of the Freedom Trail at Bunker Hill. Let’s get started! 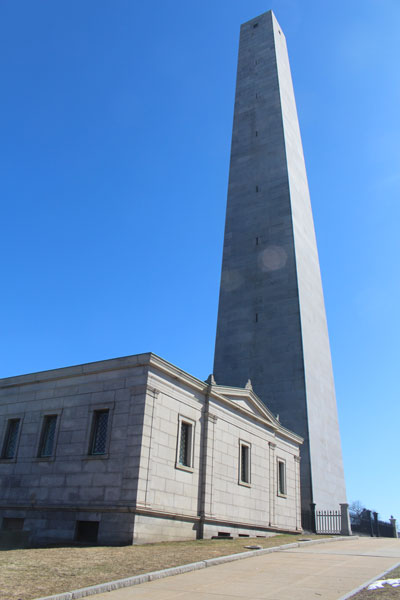 Bunker Hill — the rebels lost the battle but inflicted heavy losses on the British.

There are several very old cemeteries along the Freedom Trail

We passed several large walking tours, this one gathered in front of Paul Revere’s house.

The church where two lanterns were hung to warn that British troops were on their way.

Statue commemorating Paul Revere’s famous ride to warn that the British were coming. Church where the two lanterns were hung in the background.

Stop for lunch at the oldest continuously operating tavern in the USA, or so they say. 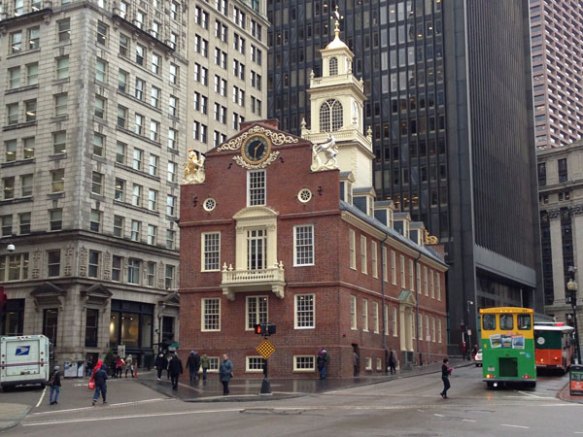 The Old State House now contains a museum that describes the origins and key battles of the revolution.

Performers re-enact the speeches made earlier on the night of the Boston Tea Party.

Getting instructions — the sons of liberty only threw tea overboard, nothing else.

The original Cheers is conveniently located near the end of the Freedom Trail.

1 thought on “walking the freedom trail”