We’re already in Sihanoukville, Cambodia as we post this – after four days on Penang Island and four days on Phuket Island, we wandered the streets of Bangkok for three days, hopped another border to see the ancient sites around Siem Reap, Cambodia and then travelled by boat to Phnom Penh. After that, a bus to the coast. So we have some catching up to do – we’ll cover the beaches and Bangkok today.

We bused from Kuala Lumpur to Butterworth on west coast of Malaysia, and quite conveniently the ferry terminal is next to the bus station. On the other side of the water the city bus terminal is right across the street. We happily discovered there was a stop right at our hotel. We had selected the Four Points by Sheraton, which sounds expensive, but wasn’t; they were offering a grand opening (or re-opening, we weren’t sure) deal that was too good to pass up. We had a fabulous room with a huge window looking out over the water and a small sandy beach. We spent a lot of time on that beach, no sellers, no boats, no hassle, and to our happy surprise, very inexpensive beer and meals on the hotel deck. We read about a beach a few kilometres away that was described as “3 kilometres of white sand – the Cancun of Malaysia”. Nice try. Batu Feringgi was the dirtiest and most run-down patch of beach we’re ever stepped foot on, and off as quickly as we could.

Phuket Thailand was another story altogether. We had decided to stay at Patong Beach, which we knew was the epicentre of tourist craziness – and it sure was. Wall-to-wall tourists and touts on the beach and in the streets all day and night, and in the overflowing bars during generous happy hours. Lots of Australians come here, and an increasing number of Russians catching direct flights from Moscow – signage is in Thai, English, Chinese, and Russian.

We booked a day boat tour to Phang-Nga Bay – an area with numerous small islands and beaches, and a very small but tall island promoted as the James Bond Island for its role as the headquarters for the bad guy in The Man with the Golden Gun. We enjoyed the great scenery along the way, had a wonderful paddle under the edge of one of the islands, and saw lots of sea hawks and sea eagles. Ironically, although the tour brochure heavily promotes James Bond Island, it was the shortest stop, barely enough time to get the requisite photo (whereas the stop at an overpriced craft market on another island was painfully long).

We also did a self-directed island tour up to see the Big Buddha, numerous temples, the old section of Phuket Town, feed elephants, and visit a cashew factory. It’s a very big Buddha that rivals Cristo Blanco in Rio as a mountaintop landmark that can be seen for miles in every direction.

Bangkok is a huge city and like Vancouver, they have a light rapid train line that zooms you directly from the airport to the centre of the city and connects with the other light rapid transit lines for getting around. Our hotel in Bangkok was about three blocks from an LRT station, which was also our connection to the main attractions downtown. Buddhism is huge here and the city offers a range of important Buddha images – the largest golden Buddha in a temple in Chinatown, a small but mythical Emerald Buddha at the National Palace (actually made from jade), and a 150 foot long gold-leaf reclining Buddha at Wat Po.

With admission to the Wat Phra Kaeo and the Grand Palace Complex you can have a guided tour, in English, of this huge and nationally important site. Men and women have to borrow pants and short-sleeve shirts if you are dressed in shorts or shirts that reveal your shoulders, but they are well organized and deposits are returned to you on your way out. We were massively impressed with all the intricately carved statues and temples commissioned by a succession of kings, and the massive palace itself. We were in the city just a few days before the king’s birthday, and there were signs and banners and shrines everywhere declaring “Long Live the King”, apparently he is quite loved by the people. In fact, it was expected that there would be a truce between anti-government protesters and the authorities on and around observance of his birthday on December 5.

We dropped by the main rally site at the Democracy Monument and saw tens of thousands of people gathered to hear fiery speeches and show their support for change. Hugh tents provided shelter from the hot sun, and tons of bottled water, fresh cold cloths, and even food and other supplies were available for free. There were also lots of people selling the plastic whistles and hand-clappers you might have seen on TV, and all kinds of other items bearing the Thai flag or images of the protest – the most commercialized protest we’ve ever attended! (A few days later the Prime Minister did dissolve parliament and promise to hold elections in the near future; not sure if that’s what the protesters really want.)

We also traveled up and down the river – a major commuter system that gets you out of the heavy street traffic and congestion, although you do get packed in like a sardine and have to be ready to quickly jump on and off the boat because there is no waiting,

We’re really enjoying our time in SE Asia, but increasingly noticing how smog-bound the cities are. Buses, heavy trucks, untold millions of motorcycles and obviously no emissions controls.

Penang — view from our room

Sea Eagle (or Sea Hawk, not sure) Phang-Nga Bay

Home of the Gold Buddha, Bangkok

Who knew Ronald was a Buddhist! 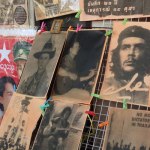 What’s a protest without at least one Che Guevara poster?

1 thought on “beaches and bangkok”