We fell in love with Valparaiso when we were near here (Santiago) for an Amnesty International conference in 2008. We decided then we would love to live here for 6 months of the year…. good weather times only of course. The winters here are full of rain…. more so than Vancouver and with incredibly strong winds (info from a taxi driver), so much that there is no point in using an umbrella … they all turn inside out.

Our last weather report to you was great heat day and night… things have changed. In the morning we wake up to either thick fog that engulfs the port and the city, with the upper hills in view … or … the clouds have come in and nothing is in view. Fortunately, it burns off and we get to enjoy the sunshine once again, though not as warm as last week.

We have been moved to the most sought-after apartment in our B&B with lovely views and this time a microwave. We got an incredible rate for the month, $700 (usual rate is $70 per night) so we don’t get breakfast, but as I love making breakfast it is no problem for us.  An interesting thing to note (weather again) is that the housekeeper put 2 wool blankets and a down duvet on the bed…it felt like we should be in the Alps or somewhere like that … I believe they think it is very cold outside.

One of our great remembrances of a few years ago was the Pablo Neruda house which we visited once again. Neruda was a prolific poet, winning the Nobel Prize for Literature in 1971. He also served as a diplomat, was elected to the Chilean Senate and ran political campaigns. At the time of his death in 1973 he owned 3 houses, all of which are now museums and cultural centres.

La Sebastiana, Neruda’s house in Valparaiso is quite incredible… views to die for, curved windows, wonderful collections of antiques and very interesting stuff.  Neruda was a man who knew what he wanted…. in 1959 he asked some friends to find a house for him… a little house in Valparaiso to live and write quietly. It couldn’t be located too high or too low,  be solitary but not in excess, with neighbours hopefully invisible – they shouldn’t be seen or heard, original but not uncomfortable, with many wings but strong, neither too big or too small, far from everything but close to transportation, independent but close to commerce. It must be cheap.

His friends, looking for a long time, finally found the house that met his requests. It was a frame of a mansion having been started by a Spaniard, Sebastian Collado, who died in 1949. He had designed the third floor to be a bird cage, thus the curved windows. Neruda, bought the 3rd and 4th floors as well as the tower, artist friends of his bought the basement, first and second floor as well as the grounds. It took Neruda 2 years to complete his home.

On September 18, 1961 the house was inaugurated with a grand party.  The invited were on a “list of unforgettable merits” those who helped transform the abandoned frame into the “La Sebastiana” as Neruda named it in honour of its first owner/builder.

Neruda and his third wife had a wonderful life there with many friends, artists and politicians alike gathering to talk and to enjoy each other. After he died, his wife never went back to the house… I believe it would have been too hard for her, too sad. Another factor was that Neruda died just two weeks after the Pinochet coup and unfortunately the house was looted.

In 1991 the house was made into a museum and restored to its past glory.  Don and I love the house; it is so cool, it is easy to imagine living there.  Of course, that would mean all of you would have to come and visit, so we could make it a place where people loved to talk and enjoy each other. 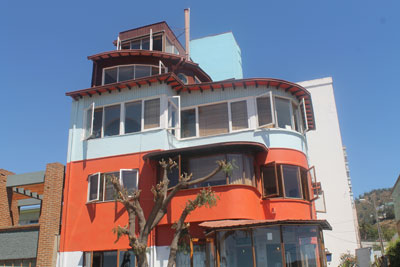 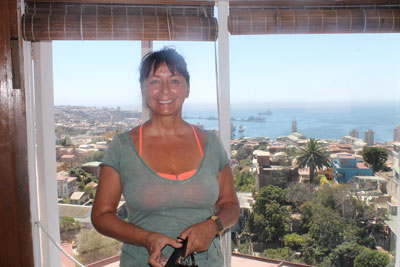 1 thought on “under valparaiso’s spell”