There is little evidence visible to tourists that over the last century much of Central America was torn apart by political and corporate dictatorships, and subject to numerous overt and covert armed interventions and military coups planned, funded, and supported by the US government. Certainly most of the people turistas interact with every day in the service industries are under 30 years of age, born since the last peace accords were signed in the region, and likely to be more concerned with earning enough money to buy US-branded clothing than dodging US-branded bullets.

A key moment in unravelling covert US support for mercenaries in Sandinista Nicaragua took place on October 5, 1986. That day, the Nicaraguan military shot down a US-built cargo plane that was delivering arms and ammunition to the counter-revolutionary contras inside Nicaraguan territory. One US crew member survived, and it was his story and the attempted cover-up that that eventually led to the Iran-Contra scandal and the downfall of NSA officer Oliver North. The shot-down plane was a Fairchild C-123, one of two identical cargo planes purchased with profits from US arms deals with Iran – the other was sitting in a hanger in San Jose, Costa Rica, and when the scandal broke, it was abandoned.

Years later, a resort near Manuel Antonio, Costa Rica, purchased the aircraft, dismantled and shipped it across land and water, and re-assembled it as the centerpiece of a new restaurant at the top of a hill overlooking the ocean. The restaurant is called El Avion, and a sign over the bar inside makes the only on-site reference to the aircraft’s story, although the resort website describes the context and lets readers know that the Costa Rican government has never explained how it came to own the plane. Fascinating how a symbol of US aggression has become a place for tourists to enjoy happy hour – the owners may not have turned a sword into a ploughshare, but one less warplane reigning terror on civilians is certainly to be celebrated! 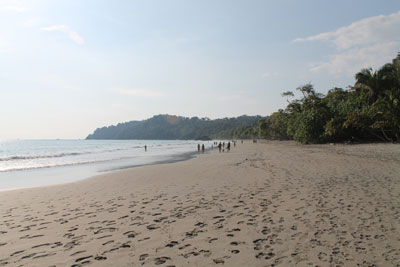