Anthropologists interested in cultural variations among humans frequently engage in various forms of participation and observation of cultural practices – which includes spending time at the research location, interacting with subjects, and taking notes – in other words, fieldwork.

So it is with our “cultural anthropologist” hats on that we left the comforts of the Tamarindo tourist zone and caught the chicken bus to a dusty little town in cattle country to witness what was described to us as the most important event of the year in Santa Rosa – the annual bull riding “Fiesta Brava”. This is not a decision we took lightly – we’re both concerned about how animals are treated at events like this. Nevertheless we arrived early enough that they were still setting up the perimeter fencing, but the mini-midway was open, so we grabbed a plate of fried chicken and a couple of beers and watched as the crew finished setting up. We were also aware that tonight was special because it was being broadcast live on television; there was a large crew from the television station setting up cameras and lights. It was a small ring, but they had as many cameras and crew members on the job as Hockey Night in Canada, including a camera on a long boom to get overhead action shots.

We purchased tickets for seating in the stands – 10,000 colones each which is $20 US – the other option was to buy lower priced tickets for standing room around the ring, but we had been told the event would go three hours and opted for a seat in the shade. The stands were about half full when a school drum and glockenspiel band marched in to perform for about 20 minutes. When they marched out, about 100 people, mostly men and mostly 20-something, many in t-shirts promoting the various corporate sponsors, spread themselves around the ring. Most were in running shoes although a few were in flip-flops; some had capes or costume parts, a few had fabric advertising signs, many had drinks in their hands. We were puzzled to say the least. And then they opened the gate to let a large bull run around the ring, alternatively trying to avoid, or charge at, this ground crew that was taunting him. Members of this large crew in turn, ran around trying to touch the bull but at the same time escape being gored by its sharp horns. This continued for about 15 minutes to the great delight of the audience before three vaqueros on horseback steered the bull out through the gate.

It was finally time for the first rider, and after much fanfare from the most annoying announcers we’ve ever listened to (there was three or four talking the whole time, laughing uproariously at their own comments or at what was happening on the field – we’re not convinced the audience was paying them any attention), the gate opened – unfortunately the rider was left hanging on the gate itself, so much for the ride! This is where the ground crew steps in to provide the entertainment – running in front of, and away from, the loose bull for about ten minutes before it is guided back to the gate. While the next rider was getting ready, they let another bull out for the ground crew to taunt and run from, again rescued from torment by the three men on horseback.

The second rider only made it a few feet out of the gate before being thrown and stomped on – and promptly carried off the field to the medical room below the stands. Again the now loose bull ran around, the ground crew ran around, and then the bull was sent back through the gate. And again, another bull was released for the ground crew to taunt. By now, it was dark, the stands were completely full, and the standing area around the ring was jam-packed. As we looked around it was evident there were very few tourist-anthropologists in the crowd – it was mostly Costa Ricans, including lots of families. Many had picnic bags or coolers – well-stocked for the long event. Three rows down from us a bottle of Johnny Walker was being shared by one group of friends and family members.

The third rider made it only a little further into the ring before being thrown and stomped on, and quickly picked up and taken to the medical room. At the end of the first hour it was Bulls 3, Riders 0.

Before the next bull was released, a man in a messy blonde wig, large fake breasts, and a dress took centre field to perform a rather lewd dance – he then ran into the stands to dry-hump male audience members, pose for photos, and pretend to pole-dance – all to the great enjoyment of the crowd, and the men in particular who were returning his lewd gestures, grabbing at him, and enthusiastically embracing him. Our neighbour told us he and some of the other characters in the ground crew are quite famous.

Following another episode with a loose bull, the field was cleared and two street-hockey size goal nets were set up and two five-person soccer teams took the field. They played for a few minutes and we thought it was rather lame half-time entertainment – and then they released a small bull onto the field and that really mixed things up, and a few minutes later, a second small bull. By this time, some of the ground crew had returned to make sure the two bulls were properly motivated to interfere with the soccer game – and we have to admit this was actually quite entertaining – the soccer players working hard to score some goals but avoid the wrath of two loose bulls.

After the game the fourth rider shot out of the gate on a very angry bull but he held on for 30 or 40 seconds before losing his grip and being thrown onto the field. We stayed for several more rounds of riders and random bulls, but this rider lasted the longest of them all. At the 2-1/2 hour mark we made our way out to the dark and car-filled street to find a taxi back to Tamarindo, rather than chance having to wait forever for a ride at the end.

Our fieldwork complete, we retired to a small bar near our apartment to compare notes and reflect on our observations. It was clearly a highly anticipated event rooted in the lives of farmers, ranchers, and others in the region. The crowd knew some of the bulls and riders, as well as some of the more outrageously-dressed members of the ground crew; they laughed and cheered, it was a family event, and it was being filmed for broadcast to an even larger audience. We were happy we had left the tourist beachfront for a glimpse of life in the valley.

By the way faithful readers, on Sunday our blog passed the “1000 views” mark – thanks for following our travels! 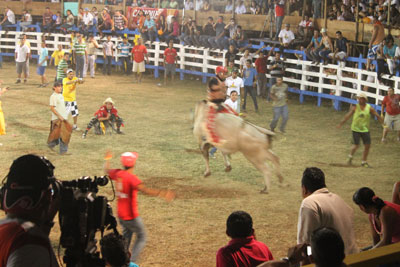 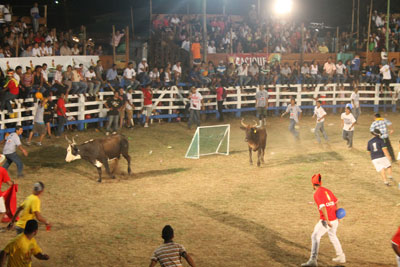 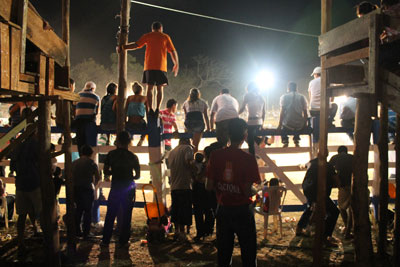