Granada is widely promoted as the oldest city in the Americas, predating places like Havana and Antigua, but the title is really a misnomer. Although established as a new world political and economic center of power by the Spanish in 1524, there is little left in the city from that time. Truth is, it was completely sacked by a succession of English, French, and Dutch pirates (including the infamous Captain Henry Morgan – got rum?) over a period of about 200 years. When American “adventurer” William Walker installed himself as president of Nicaragua in 1856, he changed the monetary system, brought back slavery, and set his sights on expanding into the rest of Central America. Needless to say the other governments in the area were not too impressed and got together and attacked Nicaragua from all sides. In retreat he ordered his troops to burn Granada to the ground, leaving no trace of the former capital city other that a sign which reportedly read Aquí fue Granada (“Here was Granada”). This means many of the city’s buildings have plaques referring to an original construction and the date of reconstruction, usually after 1860.

Still, the city attracts a lot of American and German tourists, many of whom must be sorely disappointed by what they find. A few old buildings, a town square, a three-block stretch of restaurants for tourists, a rundown lakefront area, fear after dark – and an endless stream of children, women, and old men begging for money everywhere you turn. It’s a sad, dirty city with none of the sense of pride of place we’ve encountered so far in our travels.

Speaking of restaurants, the busiest restaurant/bar in town is the Irish pub. This was also true in Antigua, and when we think about it, it seems true no matter where in the world one travels – the busiest bar in town will be the one painted green and carrying an Irish name – and it will be full of tourists and ex-pats. Guinness flowing out and money flowing in.

We were walking along the street near our hotel yesterday and we spotted and picked up what we thought might be a coin. Turned out it was a small metal disk with the name “Tom Cruise” stamped on it. We’re still trying to figure out what that means! 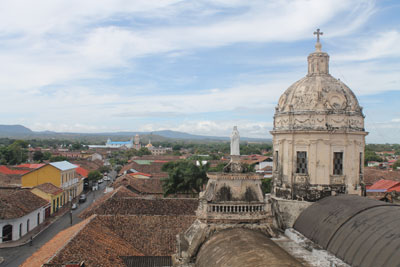 3 thoughts on “city sacked by pirates and former president”